I have a friend with 7 kids (yes, feel free to gasp) and every year her family does a summer bucket list.  Year after year I think, ‘We really need to do something like that,’ and year after year we don’t do it.  So this year I decided it was time.  We’re going to do our own summer bucket list.  Ella and I sat down and talked about several activities that she wanted to do and things I thought would be a lot of fun for her.  We created a list, colored, cut and taped it to the wall, and here we are.  Tomorrow is Ella’s last day of school and summer break officially begins! 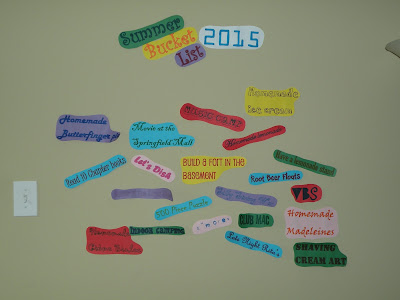 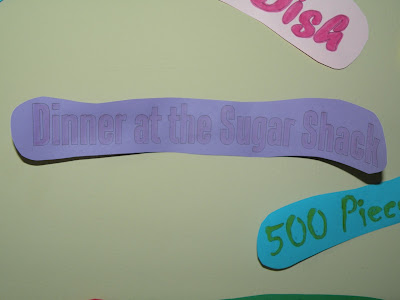 I suggested that for the last day of school we hit up Sugar Shack for dinner (it’s an awesome doughnut place).  Ella, being the logical one, said that they are having doughnuts at school so she thinks it would be a better idea to eat something else for dinner.  2 doughnuts in 1 day is a lot for a kid.  In her exact words, “It would be crazy town in our house!”  We’ve decided to order Chinese food instead.

As you can see, most of the activities involve learning how to cook something.  Since cooking is Ella’s latest passion, she has a lot of items she wants to learn to cook.  The problem is that most of these items are beyond my cooking level.  Crème Brulee…really?  Madeleines…you want me to cook a French cake?  Homemade lemonade…sounds easy, but is it?  Don't worry, I've got Root Beer Floats covered. 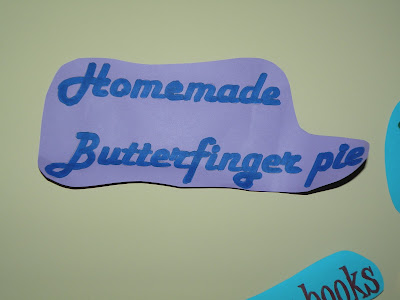 The Butterfinger Pie was my addition.  I had one at a restaurant in Maryland and it was heaven on a plate.

This first week of break will be spent at home.  I'm sure we'll check a couple of things off the list and it will get the summer started on the right track.   Today we're heading to Target to pick out a 500 piece puzzle and some Silly String. 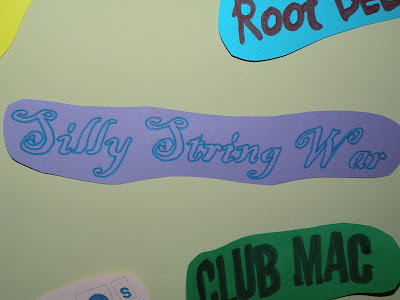 Posted by Katie Murray at 10:07 AM No comments:

The Power of words


I learned at an early age that words have power.  My mom was a communication professor and my dad was a vocal music professor.  Both made their living with words and the power and emotion that comes from them.  So it’s no surprise that early on I learned to use words and inflection in my speech.

I’m not sure what has happened, but somewhere in the past several years, this skill seems to have gone by the wayside.  Bullying has become stronger than ever.  Either the kids don’t see the implications of their words, or they simply don’t care.
I will be the first to admit that there are times I have diarrhea of the mouth.  Words start pouring out of me before my brain can comprehend what I’m saying.  As soon as it registers what I’m saying, I try to shut up.  Instead I often just keep talking as I try to cover up and make excuses for what I just said.  It’s a vicious cycle.  Age has played into my favor and I feel I am getting better as I get older.  I am getting a grip on managing my mouth and am learning the importance of thinking before I speak.

That said, I can say with certainty that I have never been a bully.  I was never known as someone who said unkind things to others.  People have feelings, and I have tried very hard to be nice to everyone.

The other day Ella and I were having a conversation about the importance of her always telling me and daddy the truth.  I wanted her to know that she can come to us with anything and when we ask a question it’s important for her to tell us the truth.  I emphasized that she always needs to tell us if someone makes her feel uncomfortable or acts in a way she thinks is inappropriate toward either her or her brother, and I especially emphasized how important it is for her to tell us if someone says something unkind or is mean.

After I said my little speech I could see the wheels turning.  Finally she said, “Mommy, something happened awhile ago that I forgot to tell you about.  I was going to tell you, but I forgot and just now remembered.”  I braced myself.  This could either be something really big that needed action, or something really minor that was only important in her 7 year old mind…either way, how I responded to this was going to set the tone for the future.

Ella: “A few weeks ago a kid called me a name.”

Ella: “He called me a monster.”

Insert complete heartbreak.  I choked back the tears.  How could someone say something so cruel to my beautiful, sweet, kind daughter?  Ella would never hurt a fly…I know she wouldn’t do anything to prompt such a harsh word.  And where were his parents?  Why didn’t they correct this behavior?

I stopped and looked Ella directly in the eye.

We talked about the situation a bit more, then I thanked her profusely for telling me and told her how proud I am of her and what an amazing and loving girl she is.

I realize that this boy is someone we don’t know.  Ella didn’t know his name and says she hasn’t seen him since.  We don’t know his parents and the likelihood that they read this blog is slim to none.  But I wanted to write this for one main reason…to ask all of you to please talk to your kids and grandkids (and anyone else who will listen) about the power of words.  This incident happened several weeks ago, yet the power of that word…monster…has remained with Ella.  It has been buried deep in her heart.  When she hears the word in a book or sees a monster in a movie, she goes back to that interaction and sees herself on the same level as the horrible creature being displayed.

They say that it takes 10 positive words to cancel out 1 negative word.  Teach your children to focus on the positive.  Show them how to be one of the 10 positives because you never know how many negatives a child is hearing.
Posted by Katie Murray at 5:09 PM 2 comments: