Saturday was Ella’s 5th birthday party.  Her official birthday is on Thursday June 21st.  She is very excited about being a big 5 year old!

Ella chose the theme of her birthday about 6 months ago…Cat in the Hat.  I was very excited about this theme because we are big Dr. Seuss fans around here and I thought I could come up with some fun Dr. Seuss activities.  All along the way Ella kept reminding me that this is NOT a Dr. Seuss birthday party…it is a Cat in the Hat birthday party.  There is a BIG difference when you’re 5.

Ella also took it upon herself to decide which characters we all would be.  Of course she was the cat, poor Metti was chosen to be the fish, and Joe and I were chosen to be Thing 1 and Thing 2. 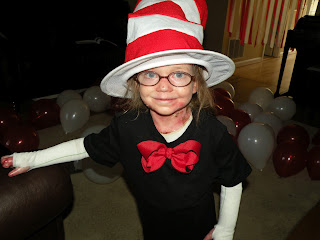 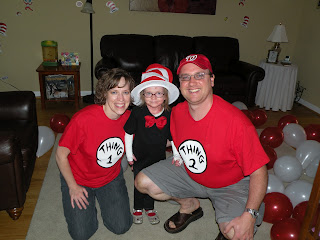 Once again, Metti and I spent all day decorating.  I definitely bumped things up a notch from last year.  The good thing about the Princess party last year was that there is a TON of princess stuff to buy.  Every store I went to had something different I could add to the mix.  That isn’t the case with Cat in the Hat.  In fact, any Cat in the Hat specific stuff I had was ordered by Grammy off the internet.  I did find some wall decals at Target, so those helped enhance the theme of the party.  I also found a hat and some paper hats to tape around the room.  The rest of it was self made.  There were no Cat in the Hat invitations to be found, so I had to make them myself.  And all of the rest of the decorations were in red and white.  I wanted it to look silly like Dr. Seuss is known for.  When Joe came home from work after we had decorated, I can honestly say that he was speechless. 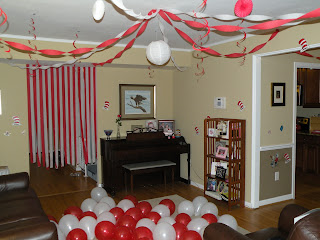 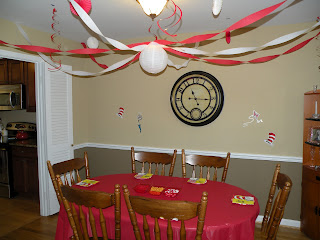 Our original thought was to have an afternoon party starting at 1 and ending at 3.  Well, Ella is convinced that a birthday party isn’t a party without pizza, so we moved things up an hour and included lunch in the deal.

I learned my lesson last year when I had 3 activities planned and 2 of them took a total of 30 minutes, so this year I planned several activities.  I had 2 that I knew would take longer to do, and I had 3 more things in my back pocket in case we rushed through the first two faster than I anticipated.  I also made sure the back yard was in full working order and the lawn was mowed so that the kids could play on the swing set.  We started off with some good, old fashioned balloon bouncing.  Fact:  kids love balloons.  It doesn’t matter what size, color, shape, whether it has helium, none of that matters.  Kids love balloons.  Metti and I blew up 50 red and white balloons, yes, 50, and it was totally worth it.  I had them covering the floor and the kids loved it.  The balloons alone took up a good 30 minutes. 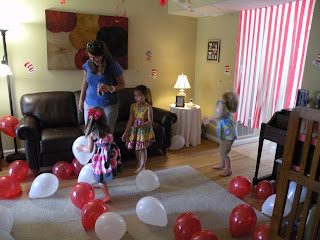 Next came pizza, and what goes better with a main dish of pizza than a side of candy?  In my defense I did email Joe and ask him if he thought I should have some fruit or veggies available.  He decided that I didn’t need that healthy stuff (it was a birthday party after all), so it was pizza with Sixlets candy, Swedish Fish and Goldfish crackers.  Yummy! 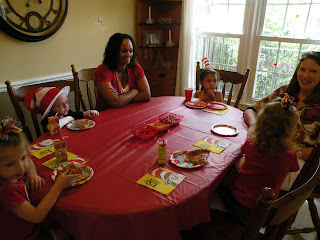 Third came ‘Pin the Hat on the Cat.’  This young generation hasn’t played most of these old standby games, so this was new to all of the kids.  They thought it was hysterical!  Shockingly most of them did a great job and got really close to the cat’s hat. 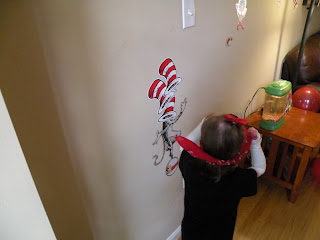 Fourth we played a game called ‘I can do that.’  It’s a board game that you can get at Target, and I just adapted it for a birthday party.  It comes with several objects from the Cat in the Hat book (fan, toy man, fish bowl, cake, Mother’s new gown, boat, rake, etc).  Before the party I had typed out several activities to be done with these objects.  The girls would draw a piece of paper out of a bag, then perform the activity.  For example, the paper would say “Walk backwards around the Trick-a-ma-stick while holding the toy man between your knees.”  This game was a big hit with Ella when I first brought it home, and it was a big hit on Saturday.. 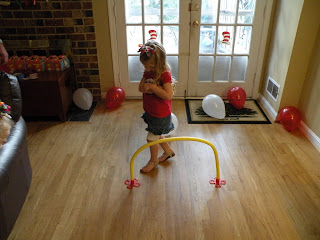 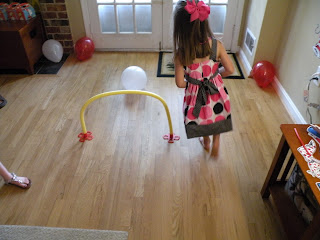 Last but definitely not least, we had ice cream bars outside (I mentioned last year that Ella isn’t a big fan of cake, so we get creative when it comes to birthday dessert) then played on the swing set. 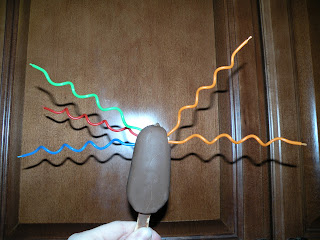 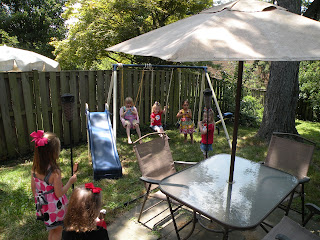 The kids all had a great time and most importantly, Ella loved it.

Ella woke up bright and early at 7 am because she was so excited for her party, so after her friends left all she wanted to do was lie on the living room floor and listen to her music (that’s how she unwinds).  It was a great birthday party and on Sunday Ella started thinking about what theme she wants to have next year.  I assured her that she didn’t have to decide right away and that we would talk about it the closer it got to her 6th birthday. 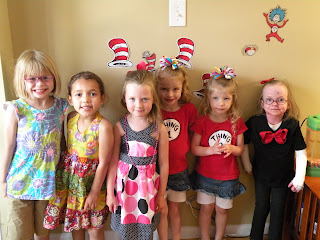 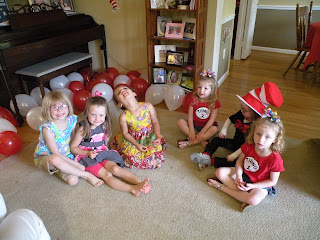 Ok, we just got back from the doctor and have several pieces of great news.

First, Ella’s iron is at a 10.9!  This is the highest it has been since she was a baby!  She had another blood transfusion last week so we’re attributing the good iron to that.  I don’t really care what the reason is, I’m just glad it was up.  In fact, the doctor was so pleased that we didn’t have to stay to get another infusion.  Ella was beyond excited for that!

Second great news, Ella is 30.9 pounds.  She has almost gained 5 pounds since getting her g-tube.  We are so excited about this great weight gain.  It’s starting to taper off since her body has pretty much adjusted to the new calories, but she’s definitely still growing.

Third, Ella’s skin is finally looking better.  She still has a couple of rough areas, but all in all she’s looking significantly better.  She had some pretty severe wounds on her legs that were causing a lot of pain and we were having trouble getting them healed, but on Wednesday they finally looked better.

That’s all there is to update you on.  We’re all so glad to finally be seeing some positive results.  Thanks so much for all of your prayers.
Posted by Katie Murray at 1:00 PM 2 comments: