Before I delve too deep into this, let me make one thing very clear…Ella is not difficult.  In fact, she’s really pretty easy.  She follows directions.  If I tell her not to do something she rarely does it again.  She doesn’t fight with other kids.  She doesn't demand a whole lot.  She’s just really easy as far as typical kid things go.  As far as her bandages, of course it’s not ideal, but they have been a part of our lives as long as we’ve been parents, so even doing her bandages isn’t really an inconvenience.  Other families plan 15 minutes for a bath, we plan 2 hours.  It’s just the way it is…it’s the way it has always been.  When you don’t know any different, it’s not that big of a deal.  And her g-tube is much easier than people think it is.  Instead of eating with her mouth, her food goes directly into her tummy, no big deal.  With all of that said, I don’t want this post to sound like kids with EB are a burden.  I don’t know any EB parent hat would tell you their kid is burden.  It’s simply not true.

We have several friends who have had a typical child after having a child with EB.  The consensus among them all is that, comparatively speaking, a typical child is a piece of cake compared to a child with EB.  I remember shortly after Ella was born, I would be talking to some other moms about typical parenting things.  Many times they would complain about various items of parenting…having diaper explosions, babies only wanting one type of pacifier, no sleep (obviously a big one), the pain of nursing, and the list goes on.  Every time I would sit in silence and think to myself, “So this is what parents of typical kids worry about?”

Ella was nervous too.  She constantly asked questions like, “What if he doesn’t like me because I have boo boos?  Will he think I look weird because I have EB?  Will you teach him not to be wild and rough when we play?”  In fact, before AJ was born Ella had a meeting with a child psychologist who helped her talk about some of her fears about having a “typical” baby brother.

All of that said, parenting a non-EB child is completely different.  Everything he does is different.  Partly because he’s a different child, but partly because we don’t have to be as cautious, so we give AJ a lot more freedom than we did Ella.  He’s much more open to other people because we don’t hesitate to hand him off.  In fact, it is not uncommon for me to pass someone in the hall at church and say to them, “Can I hand you my son?”  He is left in the nursery every Sunday while Joe and I head to bible study and church, every Wednesday while we are in class, and every Thursday while I am at bible study.  I started feeding him babyfood sooner, started testing him out on baby biscuits sooner, and I started trying to let him sit up sooner.  I let him explore more, and I let him get hurt more.  He has fallen off furniture, pulled the baby gate down on his head, and climbed the stairs.  Ella never fell off furniture and never pulled the baby gate on her head mainly because wherever she went someone was always right by her side.

On the other hand, poor AJ doesn’t get nearly as much one on one attention as Ella did.  He has to cry more while he’s waiting for me to finish up with Ella or Sabrina.  He spends more time in his exersaucer or door bouncer so that I can finish cooking dinner or washing dishes.  I don’t read to him nearly as often and we don't practice our shapes and letters as much.  And to make matters worse, as the poor second child, he has to use his sisters pink baby spoons, play with his sisters pink baby toys, and has even worn his sisters pink pajamas.

As for Ella, she has adapted to sisterhood incredibly, and is ok with her brother not having boo boos like she does.  She has even said that she is happy he doesn’t have to have EB too.  AJ loves her so much and she knows that he doesn’t care if she has boo boos.  When he sees her, he smiles from ear to ear.  When she kisses him, he grabs her face.  When she says “Hi,” he giggles and coos.  He has even started saying “LaLa” when she enters the room.”  Yes, the older he gets the more we have to watch his actions around her.  He likes to grab her arms and legs and doesn’t understand that it hurts her.  But we are cautious and when he does grab we simply remove his hand and remind him to be gentle.  A simple gesture that we want him to use on anyone, not just his sister.
Posted by Katie Murray at 10:22 AM 3 comments:


Last year Ella decided that she wanted to be Princess Leia for Halloween this year.  We had been through a lot of snow days, and on one of those days Joe and I couldn’t take “kid shows” anymore, so we introduced her to Star Wars.  She was hooked.  She even went to Target and spent her saved birthday money on light sabers.

Then Christmas came…and so did Frozen.  And Ella was mesmerized.  She bought the CD, got the DVD, and memorized all of the songs.  Whenever we would want to watch a movie as a family, Ella had only 1 suggestion…Frozen.

And with that, Princess Leia was thrown out the window and Elsa entered the scene.  Ella called her GiGi and explained in detail exactly what she wanted to be for Halloween and exactly how the dress needed to look.

Well, the much anticipated dress arrived last week.  I wish I had captured Ella’s face when she first laid eyes on it.  She was beyond thrilled.  Of course she immediately put the dress on, then grabbed my phone and started playing “Let It Go” on repeat while she danced around the living room and acted out the movie.

I'm still holding out hope that she'll want to be Princess Leia next year, but for now, I am happy that this dress makes her feel so beautiful.

Unfortunately I haven’t gotten a picture of her fully in the Elsa dress yet, but here is a selfie Ella took in her Elsa wig. 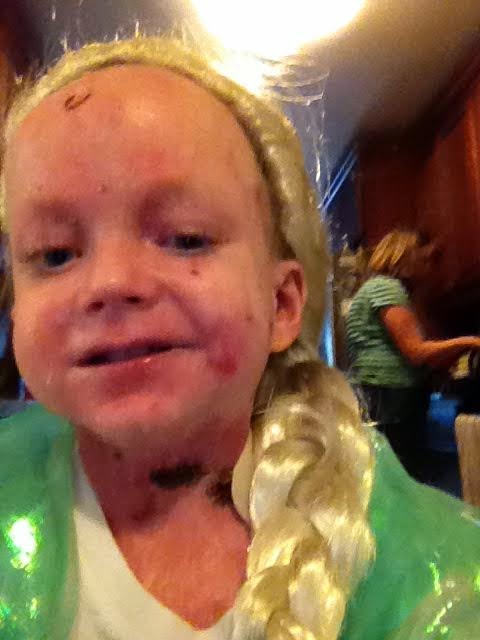 And just because I know you all are itching to know…yes, AJ is going to be Olaf.  There’s only 1 problem…he screams every time we put his Olaf hat on.
Posted by Katie Murray at 11:14 AM 2 comments: